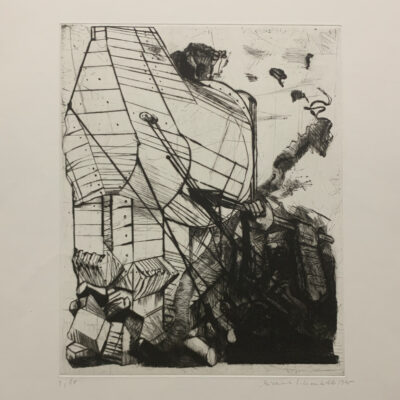 BIOGRAPHY
Largely self-taught, Tàpies experimented tirelessly throughout his career with unconventional, unexalted materials, often creating thick surfaces built up from marble dust, ground chalk, sand, and earth in a way that, as one critic wrote, “seemed to have been not so much painted as excavated…” What became his signature technique of gouging, scratching, and incising enigmatic marks into the surface of his works furthered this sense of his art as an unearthing of primal forms, with references to cave paintings and to the protest graffiti he saw on walls as a youth in the politically turbulent streets of Barcelona. Although influenced by Surrealism – in particular through his friendship with his fellow-Barcelonian, Joan Miró – Tàpies’s emphasis on the raw materiality of his works aligns him to such post-1945 movements such Art Informel, Matter Painting, and Pintura Materica. While often refusing to decipher the precise meaning of his imagery, Tàpies also resisted being characterized as an abstract painter, insisting that his aim was to exalt the most profane object, noting that “even an armpit can be every bit as transcendental as the most conventional sacred image.”

Childhood
Antoni Tàpies was born in Barcelona on December 13th 1923 into a politically active and cultured family. His father Josep Tàpies I Mestres was a devoted Catalan nationalist and lawyer who served for a time with the Republican government. His mother, Maria Puig I Guerra, a devout Catholic, came from a family of well-known publishers and booksellers. At his mother’s insistence, Tàpies received religious education early in his life – from which he gained both a fear of nuns and a distinctive spirituality that would be evident throughout his work. His school attendance was sporadic, however, owing to his poor health. At the age of 17, Tàpies suffered a near-fatal heart attack and subsequently underwent treatment for a collapsed lung. During subsequent long periods of convalescence and confinement he read widely in Western and Eastern philosophy and pursued the interest in art that had been awakened in his early teens. In 1934, when Catalan autonomy was declared, Tàpies entered secondary school and had a life-changing encounter with avant-garde art, which he discovered in an issue of the magazine D’ací i d’allà from that year that included reproductions of works by leading contemporary artists of the time, including fellow-Spaniards Pablo Picasso and Joan Miró. Tàpies was enthralled and began to teach himself to draw and paint. Two years later, while he was still in his teens, the outbreak of the Spanish Civil war affected his city and his outlook profoundly. Heavy bombing left Barcelona ravaged, destroying a well-known bookshop owned by Tàpies’ grandfather. In 1939, Barcelona fell to Franco’s troops ending a brief period of Catalonian autonomy and establishing a brutal and repressive dictatorship under Francisco Franco.

Early Training
In the early 1940s, Tàpies seemed torn between following his father into law and pursuing his own path as an artist. Beginning in 1942, during long periods spent convalescing from severe bouts of lung disease, Tàpies read extensively about philosophy – including Eastern mysticism – and nurtured an interest in German Romanticism and Post-Romanticism. Transforming his bedroom into a studio, he made self-portraits and sketches based on works by Van Gogh, Picasso, Holbein, Ingres, and Pisanello. Nevertheless, in an effort to please his father, Tàpies enrolled in the law program at Universidad de Barcelona in 1944. At the same time, he continued to produce art, creating dreamlike oil paintings of praying figures radiating light in the manner reminiscent of Chagall. Already, in what would be a lifelong experimentation with materials, he began adding ground chalk to his pigments to enhance their textural qualities. Expressing his admiration for the thickly painted surfaces of Van Gogh, in particular, Tàpies later recalled, “I applied paint in an extremely heavy impasto to show my disdain for academic painting.” His meeting with the poet and art critic Josep Maria Junoy while studying drawing at the Academica Valls in Barcelona contributed to his decision to devote himself fully to art. In 1946, Tàpies abandoned his legal studies once and for all.

By the late 1940s, Tàpies was receiving recognition for his talents and gaining admission into the inner circles of the Catalan art world. The distinguished art collector Joan Prats showed Tàpies his collection of Alexander Calder mobiles and paintings by Joan Miró. In 1948 Prats took Tàpies to Miró’s studio, an introduction that led to a lifelong friendship between the two artists. At the 1948 October Salon, the first post-War attempt in Spain to introduce the public to new art, Tàpies presented luminous, Magical Realist works with a strange, nocturnal atmosphere, in which Miró-like figures float above Surreal landscapes. In 1950, he received his first solo exhibition in Barcelona’s Galeries Laietanes. That same year, with a grant from the French government, he spent time in Paris, meeting another of his artistic idols, Pablo Picasso during a visit to Picasso’s studio. While in this Parisian artistic milieu, his interest in Marxist theory grew and he began addressing social themes in his painting more directly. His time in Paris also helped to solidify his romantic relationship with Teresa Barba, with whom he corresponded regularly while there. The two were married in 1954 after Tàpies’s return to Barcelona and Teresa became not only the subject (sometimes veiled) of many of his works, but also, his partner in the political struggle for democracy and human rights in Franco’s Spain.

Tàpies’s mature period coincided with his growing international reputation, as he began to exhibit widely in Europe and the United States in the 1950s and to absorb elements of postwar abstraction from both sides of the Atlantic into his art. Although this period marked his decisive abandonment of narrative – a move often attributed to his encounter with the work of the American Abstract Expressionists in New York – his emphasis on tactility and materiality and his inclusion of mysterious symbols and objects set him apart from the kind of formalism then being celebrated by American critics such as Clement Greenberg. In 1955, Tàpies met the French critic Michel Tapié, an enthusiastic promoter of Tàpies and a theorist of the postwar tendency in European abstraction known as Art Informel, an umbrella term that encompassed a range of artists who were concerned with the expressive possibilities of non-artistic materials but did not actually constitute a coherent “movement.” In his 1960 exhibition at the Museum of Modern Art, curator Frank O’Hara described Tàpies’s work in terms of its “striking originality and self-sufficiency.” Despite the difficulty of labelling Tàpies art – or, perhaps, because of it, by the time of his first American retrospective at the Guggenheim Museum in New York, the 39-year old Tàpies was considered the undisputed leader of the Spanish avant-garde.

Late Period
While Franco was in power, Tàpies’s fame was a liability. Franco’s regime did not tolerate dissent, and Tàpies was arrested, and, at one point, sentenced to death for his political activities (although, thankfully, the death sentence was revoked). Around this time, political themes gained prominence in his work – in several the Catalan flag was included – and he began producing works in print addressing the political situation in Spain. Upon Franco’s death in 1975, when Spain was returned to a constitutional monarchy, Tàpies continued as a vociferous spokesman and polemicist on art and all manner of social issues, producing posters against capital punishment and Apartheid and in support of Bosnian independence.

In the 1980s and after, Tàpies returned to many of his earlier imagery and techniques, exploring themes related to death, illness, and sex, and incorporating elements suggestive of Eastern calligraphy. These later works have often been described as conveying a more meditative emptiness than his earlier pieces, and he himself spoke of “that play of emptiness and fullness which composes everything.” At the same time, however, he embarked on unprecedented large-scale, freestanding pieces that share a visual vocabulary with such contemporaneous Neo-Expressionist artists as Francesco Clemente and Julian Schnabel. Tàpies’ final three decades were a whirlwind of attending exhibitions and receiving honors around the world. He died at 88 in Barcelona, the city that shaped him so profoundly.

Rooted in his early experiences witnessing the brutality of Franco’s regime in Spain, and in his hometown of Barcelona, allusions to human suffering and pain appear throughout Tàpies work – in flayed bandages, body parts, and scarred surfaces for example – reflecting his lifelong resistance against oppression and human rights abuses.

One of the most evocative motifs in Tàpies work is his transformation of the canvas into a wall (in fact, the word “tàpies” means “wall” in Catalan). Weathered, war-torn, bearing the marks and memories of the city street and of Tàpies own periods of confinement, these canvas-as-walls became a repeated element in his work, one that countered the conventional understanding of the painting as a transparent window into another world.

Like many artists, Tapies was deeply affected by the dropping of the atom bomb on Hiroshima and Nagasaki in 1945, which contributed to his interest in matter, the earth, dust, and other atomic particles that go into his paintings.

Tàpies works sometimes seemed to baffle American critics, who were accustomed to the flamboyant gestures of Abstract Expressionism, Minimalism, and Pop Art. Eschewing bright colors and the gleam of commercial or technological culture Tàpies’.

INFLUENCES
Tàpies created works that emphasized the supremacy of materials over representation, and sought, through a process he likened to “alchemy,” to reveal the aesthetic value in even the most humble, everyday objects. In this respect, while his overall production does not fit neatly into any specific movement, his work has been associated with Surrealism, Art Informel, Matter Painting, Pintura Matèrica, Abstract Expressionism, and Arte Povera. His ceaseless experimentation anticipated many of the elements of Neo-Expressionism, as it emerged in 1980s: the scrawled calligraphy of Cy Twombly, the smashed plates of Julian Schnabel, the exaggerated figures of Francesco Clemente, the tortured, encrusted paintings of Anselm Kiefer, and the graffiti and archetypal symbols of Jean-Michel Basquiat. To his influence through decades of inventive and challenging visual works – including five stage productions in the 1970s – must be added the legacy of Tàpies published writings, produced over several decades, reflecting on art, politics, and the role of the artist in contemporary society.

Be the first to review “Antoni Tàpies – Aguafuerte” Cancel reply