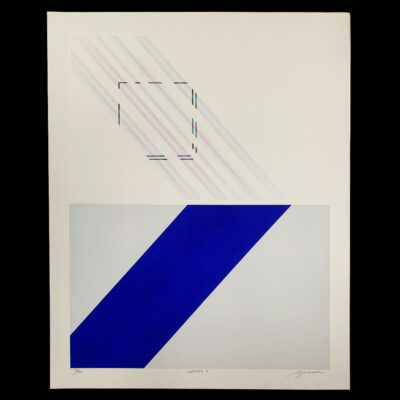 Much has been written, and quite well, on David De Almeida’s oeuvre, focusing on particular aspects of his already long career as a painter and engraver. So, it will be now desirable to know him a little further, by looking at this group of previously unseen works, displayed in Casa da Cerca’s Cistern. This will also allow us to go back in time, to find the common thread that runs through this artist’s work, in which, regardless of technique or subject, it is always possible to find a founding value, which takes the form of a coherent body of plastic reasons, based around an ontological core.

A tireless traveler, familiar with many corners of the world, David De Almeida acts as a kind of mediator between visible reality and its transformation into artistic materials. His works reflect geographies, on which he delineates itineraries that describe his wanderings and the increased luggage he brings home. That is why David De Almeida is a history-teller, rather than a storyteller — stories come later, as impressions are added and invented and form, color, smell, texture are retained, as the viewers gaze sensuously strolls across the pieces. lt’s interesting to observe that the mobility of his itinerary as an individual is clearly reflected on his work as an artist (if this dichotomy has any pertinence in this context), built through thematic urges, accompanied by successive developments in the technology of making, which express themselves in varying ways, while never discarding their constants, that is to say, the previously mentioned ontologically-based common thread.

Everything starts to be and happen on a flat surface, a simulacrum of the ground of all future happenings, where smoothness, relief, every accident and disturbance of space, time and thought are molded and imprinted by the hand, as it expresses and details the work, giving it body and consistence. Indeed, his work as an engraver relies much on an apparent randomness, while in the end everything, or almost, is actually under control — perhaps his fascination with the world lies precisely in this re-creation of its planes as a starting-point, as the basis for a construction.

Curiously, the pieces shown here lack this treatment of the surface. The background is white, a source of light, nearly as smooth and homogeneous as the color itself, symbolically evocative of purity, wisdom, divinity, peace or simply the absence of color. This white is part of an internal logic of David De Almeida´s work, already described as “the language of whiteness”, which appeared for the first time in the 1970s, when the artist abandoned painting to dedicate himself to engraving; from that moment on, it has become increasingly harder to determine how much does one of these media formally and methodologically contaminate the other.