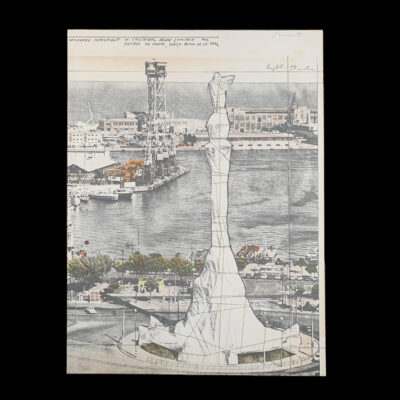 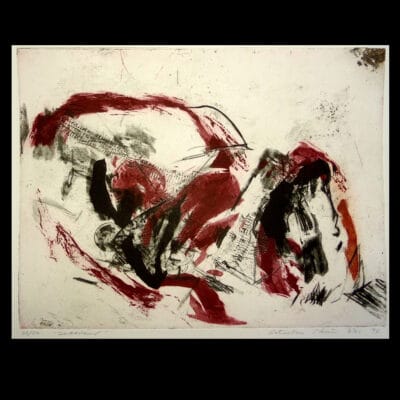 Christo Vladimirov Javacheff (born 1935 in Gabrovo, Bulgaria) is most well-known for his collaborations with his wife, Jeanne-Claude (born 1935 in Casablanca, Morocco; died 2009 in New York, USA) under the moniker Christo & Jeanne-Claude. Together, the couple produced larger-than-life environmental installations that disturb and alter the appearance of the immediate environment. They are most iconic for their wrapping projects in which they wrap their subjects in monochrome silken-fabrics to reduce them to their simplest aesthetic form—shape and color.

Christo fled from Czechoslovakia as a refugee of political revolution in 1956. Such experiences of imprisonment and lack of artistic liberty have profoundly impacted his later career and approach to being an artist. Christo has always remained outside the gallery system, preferring to be completely free of representation and dealers. This affords him a great amount of freedom in his endeavours but also means that he must fund all of his projects through the sale of his prints and drawings.

Although the bulk of Christo’s oeuvre are made up of small 2-dimensional works—preparatory drawings, sketches, models and studies—his true passion lies in the planning and execution of monumental works. The organization of each project was also done in equal collaboration with Jeanne-Claude. Islands, coastlines, streets, landmarks, and national monuments have all been wrapped by Christo.

Often controversial as a result of their scale, the artist & Jeanne-Claude made headlines at documenta 4 by erecting the largest inflatable structure (85m tall) to have ever been shown without a skeleton support. Their other projects include: the Wrapped Reichstag in Berlin, 1995 178 Wrapped Treesin Berower Park in Basel, 1998 the Wrapped Pont Neuf in Paris, 1985 and The Gates in New York’s Central Park, where over 7500 fabric gates were constructed, leading visitors along a carefully thought-out pathway.

A Swiss art museum, the Kunsthalle in Bern, gave the artists their first opportunity to fully wrap an entire building. July 1968, marked the fiftieth anniversary of the museum and the event was celebrated with an international group show of environmental works by twelve artists. As one of the dozen participants, Christo and Jeanne-Claude showed nothing inside the museum, but literally packaged the entire exhibition. “We took the environments by eleven other artists,” Christo remarked with amusement, “and wrapped them. We had our whole environment inside.”

The artists shrouded the Kunsthalle with 26,156 square feet (2,430 square meters) of reinforced polyethylene, which was left over from the discarded first skin of the Kassel Air Package, secured it with 1.9 miles (3 kilometers) of nylon rope and made a slit in front of the main entrance so visitors could enter the building.

The Kunsthalle is a bulky-looking building, despite its curved walls and sloping roof, but its hulking silhouette was considerably softened by the mantle of translucent polyethylene. The only architectural elements that remained visible with any sharpness and clarity were the contours of the roof and cornices. The sides of the building were luxuriously swaged and the plastic veiling was continually animated by soft, billowing folds and an always-changing pattern of glimmering highlights.

The wrapping process took six days with the help of eleven construction workers. Because no nails could be driven into the building, special wooden supports had to be built for fastening the fabric to the building and at one point, to facilitate work on the roof, the local fire brigade was called upon to lend a hydraulic ladder.

Insurance companies refused to underwrite the Kunsthalle and its valuable contents during the period it was wrapped, so to guard against possible fire and vandalism, the museum’s director Harald Szeemann had six watchmen posted around the building at all times. As this proved to be quite expensive, the building was unwrapped after one week.

Excerpt from the book Christo by David Bourdon, published in 1971.