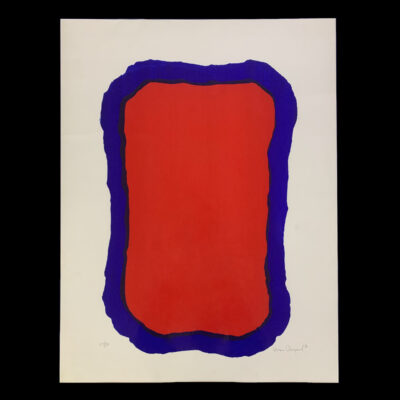 Herlinde Spahr was born in Antwerp, Belgium in 1952. Spahr moved to California in 1977 where she graduated with Comparative Literature from the University of California, Berkeley. She began stone lithography in the early eighties when she discovered an old Griffin press at the ASUC Studio on campus. Spahr set up her own studio called, “Lithium Press,” mainly focusing on lithography.

Spahr has received many awards, and her prints are apart of major public collections, such as Fine Arts Museums of San Francisco, Oakland Museum of California, the Morrison Collection at UC Berkeley, the Royal Museum of Antwerp in Belgium, the Prentenkabinet at Antwerp and at Brussels, the Janet Turner Print Museum at the University in Chico, the Worchester Art Museum, the Museum beim Solenhofer Aktienverein in Germany, the Hanoi Fine Arts Permanent Collection in Vietnam and the Library of Congress, Washington DC. She has been awarded a Fulbright Grant, a Chancellor Fellowship, a Princess Beatrix Scholarship and the Kala Institute Fellowship.

About the work: The Artist’s Proof

According to Spahr, the A Frame bungalow in the image depicts the artist’s residence at the International Center for the Graphic Arts. She stayed there in 1986 and in 1987 when she had a solo show there.