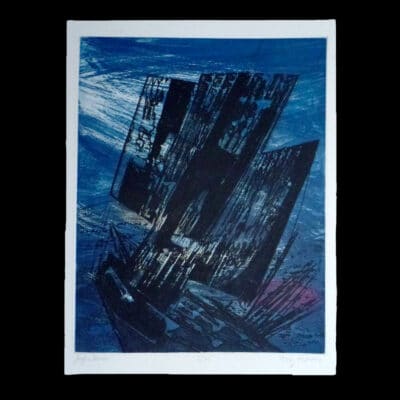 Born in 1941, Setsuko Ikai was as deeply indebted to the events of the 1960’s as their formative influences. Artistically, the decade began with the twin movements of Pop and Minimalism emerging parallel to each other. On one hand, Pop advocated the visual culture of the mainstream and mass media, and of products and consumerism. Artwork by artists such as Andy Warhol, Roy Lichtenstein, Tom Wesselmann and Claes Oldenberg was inspired by the popular culture of the fast developing Capitalism of the United States, taking things like advertising, comic books and ideas surrounding celebrity culture as their primary visual cues. A parallel movement was established on the West Coast in California – a strain that also related to language in art, and is viewed as the very first blossoming of conceptual art. Minimalism developed a formal language with no external references, focused solely on line, colour and geometric form as key elements of both painting and sculpture. The main figures of Minimalism included Frank Stella, Donald Judd and Agnes Martin. Colour Field painting, as practiced by Morris Louis, Kenneth Noland and Helen Frankenthaler, further developed some of the expressive notions of Abstract Expressionism, but reduced much of the rhetoric, instead approaching a more rule-based approach to surface and colour that associated this practice with Minimalism. Around the world a number of artistic movements resonated the artistic concerns of the previously mentioned movements, often with regional specialisms and nuance. In Italy, Lucio Fontana and Piero Manzoni established Spatialism, and in Germany the Zero group under the leadership of Gunter Uecker adopted similar ideas. The influential school of Existentialist Philosophy was an important source of inspiration for creatives, with artists like Francis Bacon and Alberto Giacometti becoming known worldwide for their distinguishing approaches to the human form and the angst related to the human condition.

Be the first to review “Setsuko Ikai – Interieur” Cancel reply