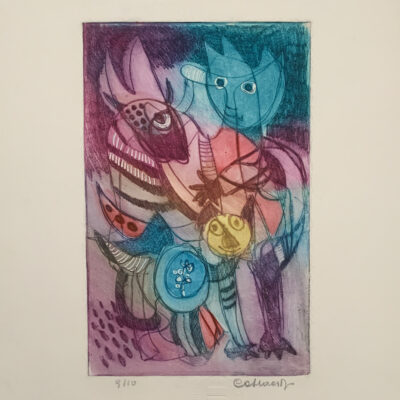 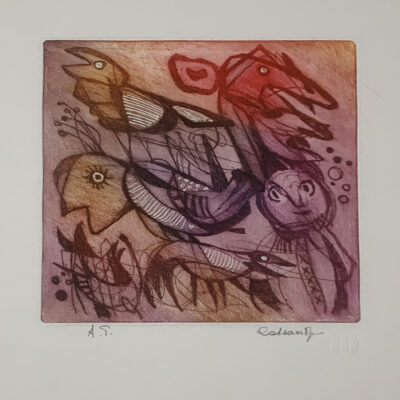 * A.P.: ‘Artist’s Proof’ are marked “A.P.” or “P/A” or sometimes “E.A.” or “E/A” (épreuve d’artiste). When technology was less advanced in the early days of printmaking the first prints of an edition were of a higher quality. Re-using printing plates would gradually wear them down, causing a decline in quality throughout the edition’s production. Traditionally, the artists would keep these prints for themselves.

Jan Cobbaert was born in Heverlee. He was fascinated by art from a young age. Once a week he attends ceramics classes in the studio of Jacques Charlier (1899 > 1964) and attends the Municipal Academy of Fine Arts. After his secondary education he realizes that he wants to continue with art. Cobbaert starts studying art history at the Catholic University of Leuven. He then studies at the Higher Institute of Archeology and Art History in Brussels. After these studies, he works as an errand boy in his father’s shoe company. In between, he paints his first works and occasionally attends classes at the Royal Academy of Fine Arts in Brussels. During this time in Brussels he got in touch with Flemish expressionism and he discovered the great expressionists of the second Latem School such as Gust De Smet (1877 > 1943) and Constant Permeke (1886 > 1952). Cobbaert’s oeuvre forms a diverse whole.

His work contains different components of various art movements, such as the second Latem School and the Cobra movement. Yet his work is mainly determined by two components.