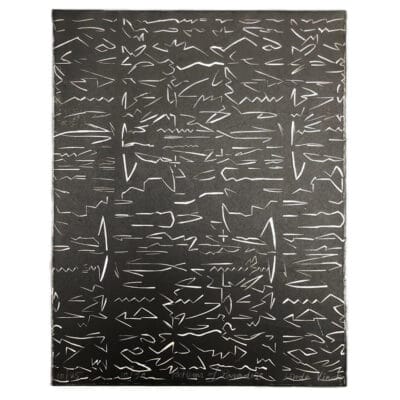 Linda Vinck (born 1942 in Antwerp, lives and works in Mortsel) is a painter who focuses on the concept of rhythm and repetitiveness in her work. She constantly repeats signs or symbols according to rhythmic patterns, until they finally come together into one whole. She uses lines, shapes and colors in this way, giving the impression that her canvases grow organically. The organization of the chaos and the structure in the disorder are the keys to her work, both in her graphics and in the paintings.

Linda Vinck has been building up a coherent graphic oeuvre in the past thirty years. She experiments with sizes: from small to very large, and explores the technical possibilities. She is a master of relief printing , but she also surprised with stunning dry-point works. After a spell on the Cape Verde Islands she introduced in het serial work a new topical concept of the arts: synesthesia, the connecting of different sensory spheres, in this case the relationship between her visual work and music.

Linda Vinck’s work appears abstract, but can also be approached as extremely realistic. It aims to reflect an essential characteristic of reality: movement. All parts, all fragments of the movement are related to each other. By themselves they mean nothing. Precisely because they depend on each other, they also call each other up. The richness of the movement, however, lies not only in the unimaginable parts of the movement, but above all in the flowing line it displays. To analyze a movement is to deny its individuality. It is not the succession of first dissected, and thus separated, parts that makes the movement movement, but the merging of what had never been parts….

The duct, as the graphic lines are sometimes called, expresses Linda Vinck’s emotional thread. It functions as a staff and as a pictorial notation. Designed, combined into a flowing line that Vinck cuts directly into the linoleum, when printed, the whole finally appears in the paper as the objective form of an intensified experience. Vinck’s personal story has thus been suppressed. One will search in vain for one anecdote in her work. The individual feeling is, literally, pressed into a rhythmic pattern that now leads a life of its own. The repetitive writing has been pushed aside, effaced by the writer herself. In this way Linda Vinck succeeds in realizing an old dream from the illusion arsenal of mankind. She has captured what moves. Vinck’s scores can be sung by everyone in her or his own way. No one needs an intellectual manual to participate in the visual power of her graphics. One has only to dance or sing inwardly. To keep everything moving.