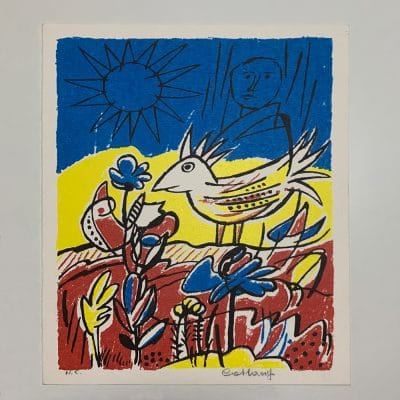 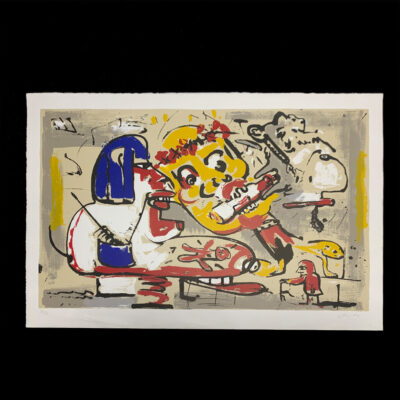 Roger Raveel was born on July 15, 1921 in Machelen-aan-de-Leie, a village near Ghent where he always lived and worked until his death on January 30, 2013. He studied at the Municipal Academy of Deinze and the Royal Academy for Fine Arts of Ghent. His teachers included Hubert Malfait and Jos Verdeghem. Through his friend Hugo Claus he encountered painters of the Cobra group such as Karel Appel and Corneille in the early 1950s. Raveel nevertheless decided to take completely different paths with his practice as a painter. In 1962 he spends three months in Albisola Mare (Italy) where he works and exhibits with artists such as Lucio Fontana and Asger Jorn.

In the second half of the 1950s he evolved towards a more abstract painting that has its roots in experiencing the organic, the vegetative, the animate. Around 1962 he painted the triptych ‘Neerhof’ with a cage with a live pigeon in the middle in an attempt to establish a direct dialogue between art and reality, his ‘New Vision’.

In 1966-67 Raveel transforms the basement corridors of the castle in Beervelde, near Ghent, into a pictorial environment. He is assisted by Etienne Elias, Raoul De Keyser and Reinier Lucassen. After the paintings in Beervelde a number of painted objects are created such as ‘Illusion group’ and ‘Garden with cart to transport the sky’. His alert environmental awareness leads the artist to visualize his engagement through manifestations such as ‘De Zwanen van Brugge’ and ‘Raveel op de Leie’ (1971). Almost 20 years later, in 1990, Roger Raveel commemorates the outbreak of World War II by driving a painted wardrobe mounted on wheels through Brussels’ city center.

For his artistic activity and his contribution to art history, Roger Raveel receives honorable mentions at the Prize for Young Belgian Painters (1958 and 1960) and an award in the Europe Prize (1962), the International Joost vanden Vondel Prize (1983), the Golden Medal of Honor of the Flemish Council (1992), the title of Knight (1995) and the Van Acker Prize (1996).

Raveel is regarded as one of the most important Belgian painters of the second half of the 20th century, but his exceptional visual language, balancing between figuration and abstraction, often inspired by his immediate surroundings, set him radically apart from his contemporaries.