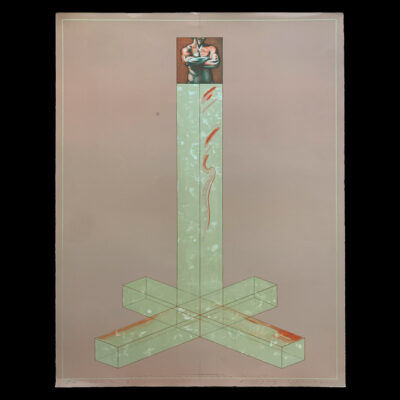 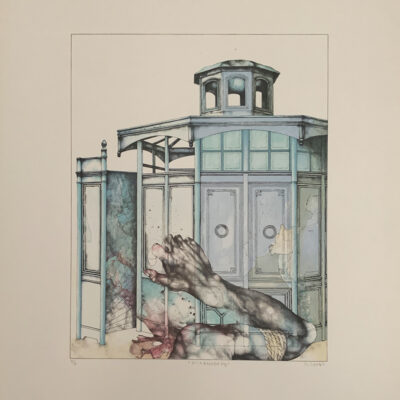 Wolfgang Oppermann studied from 1959 to 1962 at the Hamburg University of Fine Arts with Walter Peterhans and Georg Gresko. From 1962 to 1969 he taught graphic techniques in Hamburg under Paul Wunderlich. In 1966 and 1967 Oppermann was a guest at the Villa Massimo in Rome. In 1968 he was a founding member of the CO-OP artist cooperative Hamburg. Since 1978 he taught at his place of study, the HfbK in Hamburg; there he was head of the screen printing workshop.

Oppermann has been painting figurative portraits since the 1960s, which he alienated surreally with geometric, biometric or technical elements or insets. In their signet-like form, the motifs are reminiscent of works by the German-American pop artist Richard Lindner. For this purpose, Oppermann further developed the printing technique lithography, in which he printed a large number of his motifs and which were published by Dieter Brusberg in Hanover:

“The primary subject of my work is the human figure. I prefer the suggestive formulation to the demonstrative. I regard technical precision as a legitimate means of expressing my intentions… Because of its precise legibility, the geometry has become the defining formal element for me. Freehand drawing is only preliminary; I use it as a means of fixing an idea. I achieve compression and greater intensity of the line by using curved lines.”

Since the 1970s he has been designing three-dimensional objects, including kinetic ones. 1978 and 1979 saw the production of “ICH AM KUNSTMALER”, a sound film (Super 8, 35 min.), with a.o. Dieter Roth, Gotthard Graubner, Meret Oppenheim, Henry Piper, Dietrich Helms. In a 1986 catalog text, he described the reasons why he switched from the kinetic object to the medium of film:

“Objects were created for this purpose, but over time they gained such a life of their own that, decoupled from the original intention, they could stand on their own. Here I found an approach to contrast the moving image of the film with a scenario that, not reduced to a fixed duration, can have a permanent presence.”