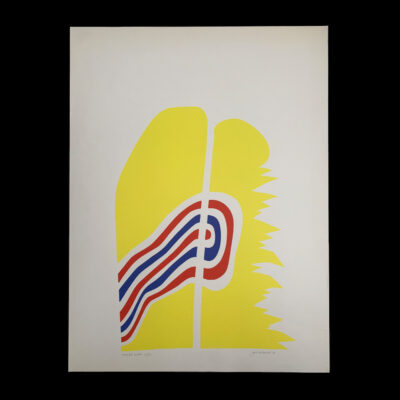 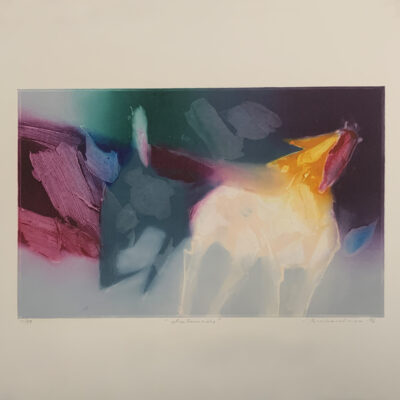 Sandy Sykes – Spell For Expressing A Train Of Force

* A.P.: ‘Artist’s Proof’ are marked “A.P.” or “P/A” or sometimes “E.A.” or “E/A” (épreuve d’artiste). When technology was less advanced in the early days of printmaking the first prints of an edition were of a higher quality. Re-using printing plates would gradually wear them down, causing a decline in quality throughout the edition’s production. Traditionally, the artists would keep these prints for themselves.

Sandy Sykes M.A. was born in Yorkshire and is a painter, printmaker and maker of artist’s books. Since 1970 Sykes has exhibited widely both nationally and internationally in solo and group shows, some of which have toured in Britain, Europe, USA and Russia. Her work is held in numerous Private and Public Collections including Tate Britain, Victoria and Albert Museum, The Museum of Modern Art and Metropolitan Museum of Art, New York.

2016 ‘The RE Annual Exhibition’ For Arts Sake Gallery, Ealing, London.

2013 Invited artist to ‘SKETCH 2013’ Rabley Contemporary Drawing Centre, Marlborough, Wiltshire. Travelling to Black Swan Arts, Frome and Plymouth College of Art in 2014. Member of the panel for the Seminar ‘The Role of the Sketchbook in Contemporary Art Practice’. Discussion and blog. Conducted ‘Sketchbook Workshop’ and Print tutorials. Conducting the Course ‘Drawn to Ideas’ and further Print Tutorials in 2014

2013 The ‘Parallel Prints’ project is a portfolio of prints by 12 artists, which was shown simultaneously at the ‘Impact International Print Conference’ in Dundee, Scotland, the Wharepuke Gallery, Kerikeri New Zealand and at Ian Rastrick Fine Art, St Albans in August. Preface to the portfolio is by Richard Noyce.. Travelling to Galerie Apart, Marcilhac-sur-Cele, France, and Pirna, Dresden. The Jinling Museum of Art in Nanjing, and  International Print Center New York are interested for 2014. www.parallel-prints.com

2006 Residency at ‘firstsite’ Contemporary Art, Colchester. ‘Dwelling’ drawings made there of temporary shelter, and kites were then exhibited at Rabley Contemporary Drawing Centre.