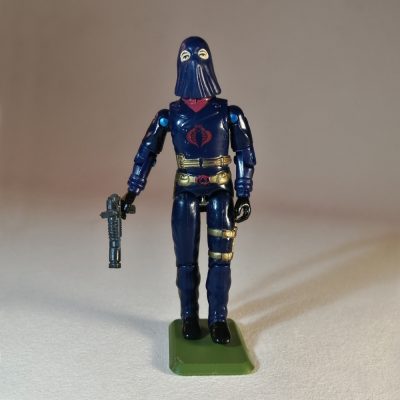 Vipers are the backbone of the Cobra Legions. They are highly motivated, superbly trained and formidably equipped. All Vipers are issued a combination assault rifle/grenade launcher; the rifle part of which can function as a short burst assault weapon, a sustained fire cover support weapon, or a long range sniper rifle with an advanced light-intensification night vision telescopic sight with a built-in range-finder. Multi-layer body armor and wraparound acrylic/composite helmets with built-in RTO* gear are standard issue.

“If you want to get anywhere in Cobra, you have to start out as a Viper. That’s the bottom of the pyramid, and serving in the Cobra infantry is a small price to pay to gain access to the glittering prizes at the top. Cobra doesn’t reward success with parades and medals. They offer material wealth, power and an outlet for the terrible urges that drive the greedy, the envious and the cruel. If that doesn’t make a Viper a dangerous opponent, nothing does!”

Be the first to review “Vipers – Cobra Infantry” Cancel reply